New Year’s Eve, 2011. I’m coming down Sunset Plaza, a really windy road with million dollar homes right above Sunset Blvd. in LA. I’m in my Green Beetle, which is a lean and fast machine. Sunset Plaza’s a pain in the ass to drive under any circumstance but nightmarish should you end up behind a slowwww driver, which is what fate dealt me this New Years when I was in a big hurry to get to my destination, my friends Nancye Ferguson and Jim Burn’s pad, an ultra modern built-for-Brian-DePalma-in-the-70’s house that teeters on stilts overlooking the city. Here’s the view from the balcony: 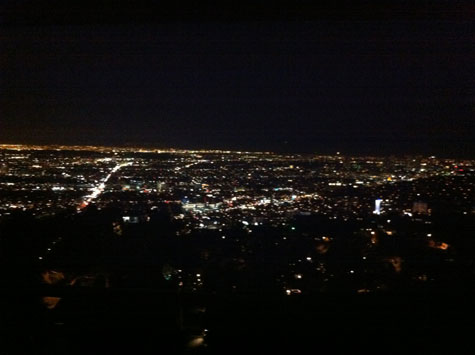 There are very few parking spaces to accommodate a small fraction of the 50 people on their way up there. If you don’t get one of those spaces you have to turn around in a teeny tiny cul-de-sac and drive a quarter mile out the little windy road with hardly any shoulder and a drop-down of hundreds of feet. And then you’re back out on the main winding road where there are about two parking spaces for every fifty people. No way am I limping back up that hill on foot! So I start leaning on the horn behind this little black car driving at funeral speed. To my credit, I only honked when there was enough room for the stupid driver to pull over so I could pass. Finally, after five minutes the car hugs the curb and I whiz past, gunning it extra hard to show my annoyance even further.

I get to the house and thank God there’s a space left. I pull in, put some lipstick on and send a few emails on my iPad before I go in. A couple of cars pass me and I don’t see them coming back down the hill, which means they must’ve found parking spots too. I finally get out of the car and trudge the last 20 feet up to the house. Standing there is my good friend, Beverly D’Angelo, with a guy I don’t know. Beverly and I go way back and I love her. She’s also an excellent party guest, a criteria I have incredibly high standards for, and has been coming to mine for years.

Just as I’m getting in hugging range I hear Snappy P yell, “Green Beetle, that must have been Allee!”. “You fucking asshole, you almost drove us off the road!!,” screams Beverly as I approach. Oh shit, I rarely misbehave behind the wheel anymore and now I’ve gone and terrorized a friend. But then it gets worse, “Meet Sid Krofft,” she says, referring to the mystery man next her, adding that she brought him to the party specifically to meet me. Now I’ve been waiting to meet this guy since the late 60’s when his puppets, marionettes and insane live action shows started ruling TV and now I’ve almost killed him. “I wanted to get out of the car and tell you what an asshole you were” he says. Thank God the Beetle was turbo-charged and he didn’t have a chance. I ate a lot of crow for the next few minutes, but it was immediately apparent that Beverly was completely right. This guy was a kindred spirit and we hit it off like we had known each other for decades. Though Beverly had told Sid he HAD to come to Willis Wonderland, I went to his place first, now a couple weeks ago. I took hundreds of photos but I can’t show any of them because Sid’s a really private guy. But it’s as handcrafted as my place is times 6 trillion-on-steroids. In actuality, I didn’t really get full tilt into the Kroffts back in the day when their shows were on the air because by then I was way way way deep into records and the radio. As a fan and later as a songwriter, when my radio habit lurched into twelfth gear and I lived and breathed music every millisecond of every day, I was still aware of that Sid and Marty Krofft name and that it stood for something crazy. But it really wasn’t until so many friends of mine insisted I go to an auction of their props at the Beverly Hills Hotel in 1998 that I realized the extent of that craziness as well as the magnitude of its reach. As a kitsch lover, how could I have not been familiar with every single detail of the Kroffts’ career, the guys on the throne at the top of the kitsch mountain??

YouTube, of course, makes for an excellent crash course. So I’ve seen more of the Krofft brothers’ magic in the last month than I have in my lifetime. And my respect and discovery of the depth of influence their work had on me subliminally has been a revelation. H.R. Pufnstuf is probably their most classic: 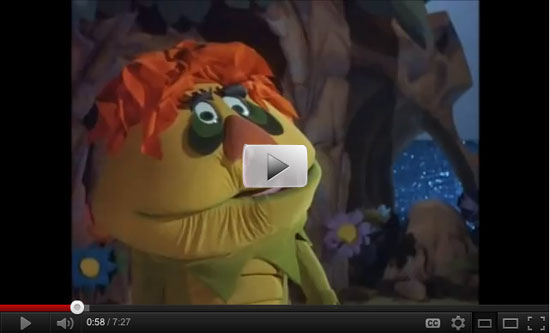 I don’t like to wake up early for social visits but at 82, Sid Krofft is in REMARKABLE shape, jogging 9 miles a day + a couple hours in the gym, so he’s raring to go when the sun comes up. 10:30 bright and early a couple of Tuesdays ago he and Beverly were at my doorstep. I even got it together to cut up healthy food for him. This is a BIG step for me as this is what’s more likely to be on that table on a regular basis: Sid was as fascinated by Willis Wonderland as I was of his hand-built abode. As my yard is part of my living room, we hit that first. Although it was raining when I took the following shot, you need to see those GORGEOUS 1950’s fiberglas fish lounges sans people: 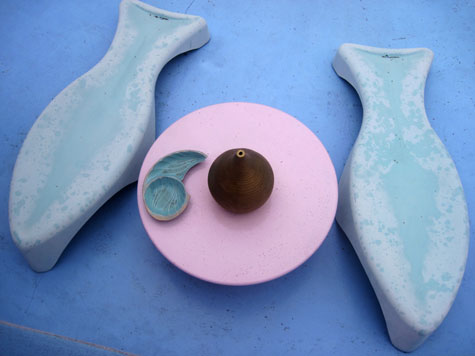 As we strolled around outside we were joined by Donny Molls, a great artist and Sid’s next door neighbor: We stopped and chatted in every room: 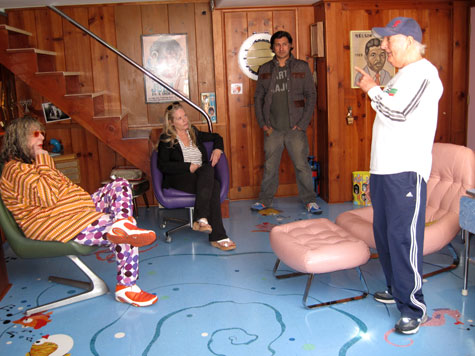 My downstairs, where that shot was taken, is particularly packed with memorabilia, some of which is Krofft Brothers stuff I’m happy to say I had the good sense to collect even if I wasn’t sure exactly what it was when I bought it. If you’ve never seen Electra Woman and Dyna Girl, double up your sedation and watch now! EASILY one of the greatest title sequences in the annals of kitschdom: Thank god I had a few View Master disks of Electra Woman and Dyna Girl in my collection too: Sid and Michael Jackson were great friends so I pointed out some of my primo MJ cheese: 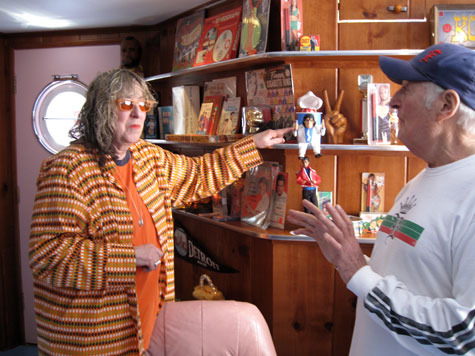 You really need to see what I’m pointing at. Yeah, I got the doll and the puzzle like a zillion other people… 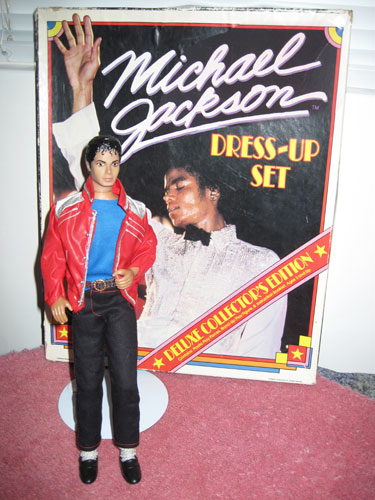 …but who else do you know who has the drink cooler?! This is easily my favorite piece of MJ memorabilia I own: When we got to my dining room… … Sid posed in front of Mr. Wah Wah, a stunning portrait painted by my alter-ego, Bubbles the artist.: We spent a lot of time in my recording studio too. 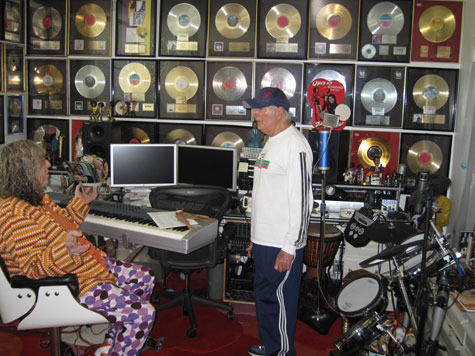 Although Sid has a computer he’s not obsessed with them as I am of my 11 networked Macs. So what we really wanted to do was show him how much of his stuff is online. And there’s gaggles of it – H.R. Pufnstuf, Land Of The Lost, The Bugaloos, Lidsville, The Donny and Marie Show, not to mention Electra Woman and Dyna Girl for starters. And no exploration of Sid and Marty Kroffts would be complete without the Brady Bunch Variety Hour: The Brady Bunch is certainly coming up A LOT lately!

One of THE most classic and cheesiest shows EVER on TV was called Pink Lady and Jeff. 1981. I remember being so intrigued by that nutty title that I tried to catch the show whenever I could. Imagine the complete and total ecstasy-breakdown I had when I saw the Pink ladies immortalizing my song,”Boogie Wonderland”: Watching this again with the creator of that show who was totally in on the cheese joke of it all was even more thrilling. As we were poking around doing searches on YouTube I discovered that not only did Pink Lady do that quintessential performance of the song, they also recorded it. I’m still gasping for breath: What a day I spent with the gang. Here’s one last parting shot for the photo LP before everyone left: 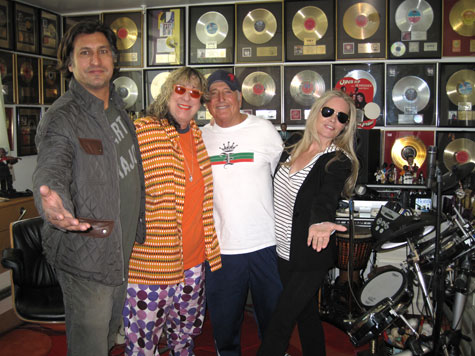 I sho love me some Sid Krofft!!