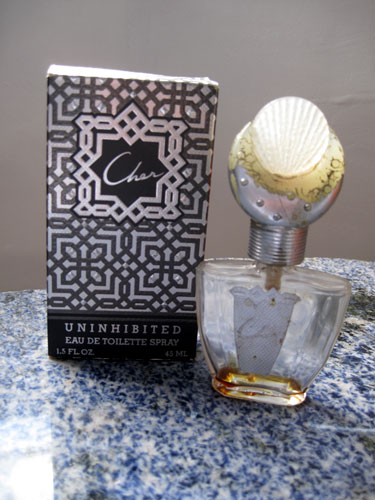 Unfortunately, my bottle of Cher perfume, given to me as a birthday present one year by Elvira, is long empty. Just like Burlesque, the film that opened this week that Cher and her once great face that no longer moves stars in. But in the case of Burlesque, I wasn’t expecting emptiness so much as a big fat Thanksgiving turkey gloriously stuffed with kitsch. I’d been whetting my lips for a year and a half since the insanely done-to-death-27,000-times-over storyline was revealed to me when I, along with God knows how many other songwriters, was asked to submit a song for the film. My co-writer dropped the ball and never handed in any of the three we did  – I’ve yet to even hear a mix…..Earth to Steve…..but often when my songs haven’t made it into a film it saved me from being stuffed into too many cinematic turkeys. Unless, of course, you count Howard The Duck, which I co-wrote five songs for with Thomas Dolby. But that was just about writing with Dolby and George Clinton as, despite being excited about being in a George Lucas produced film, I knew it was headed for the turkey farm my first time on the set when Howard, a little person stuffed into a costume that looked like a pillowcase with feathers glued on, ran in. 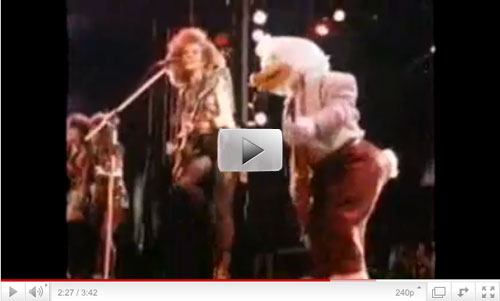 I was so excited to see Burlesque that I even organized the first public outing of my film club, L’Chien Du Cinema, The Dog Cinema, to leave my living room and see a film at an actual theater for the first time since 1983 when we were lucky enough to have two turkeys in the same season, Pia Zadora’s monumental Lonely Lady and Dolly Parton and Sylvester Stallone’s immortal Rhinestone. 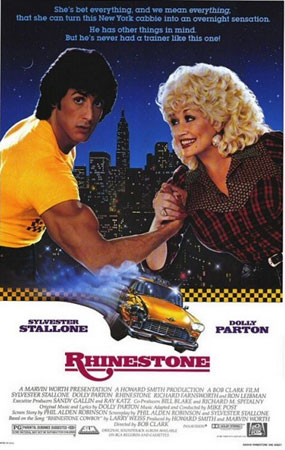 But, alas, Burlesque isn’t so much a turkey as one big, long, never-ending lump of white, packaged mashed potatoes. No gravy, no cranberry sauce, not even any turkey; just constant servings of the same bad blue lighting on Cher, the one forlorn look from Christina Aguilera, the same numbing beat of predictable songs and we’ve-seen-it-before-Pussycat-Dolls-with-a-hit-of-Flashdance choreography, a story as predictable as jelly slopped on top of peanut butter, and all of it hitting with such regularity that your eyeballs go numb. An endless, bombastic pile of nothing. At least my empty bottle of Cher perfume has enough in it you can still smell some brilliance of what once was. 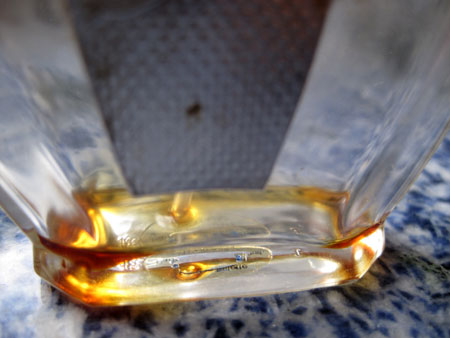 Which is a shame as all the bad film faithfuls that came to see it with me had high hopes Burlesque would be a contemporary classic of Showgirls proportion. I even got out the old the ol’ doggie bags and filled them with gold sprayed Milk-Bones, as the tradition of L’Chien is for everyone to throw down their bones and rate the films, a 5-boner being the biggest dog and a 1-boner not even worth the price of the ticket. 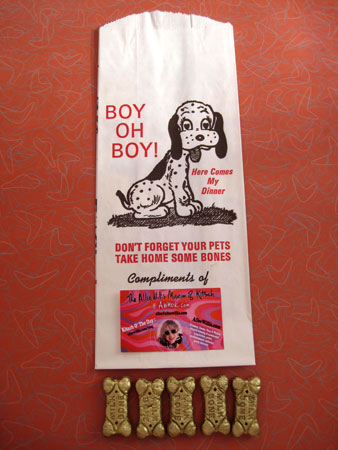 Here I am walking in with RuPaul:

And here I am at dinner after the film with more of the party faithfuls where we discussed and rated the noisy pile of mush we’d just seen. (Clockwise: Christian Capobianco, Craig Fisse, Michael Patrick King, Gail Zappa, Diva Zappa, LaLa Sloatman, Bob Garrett, Charles Phoenix, me, Prudence Fenton and Pat Loud, the matriarch of the first reality show family ever.) 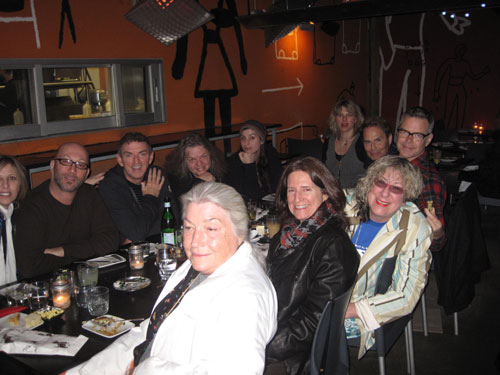 It was a sad night for Burlesque as far as our boner ratings went: 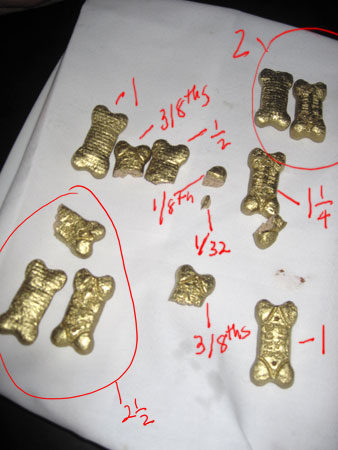 Back to my Cher perfume, the silver paint on the cap has curdled away: 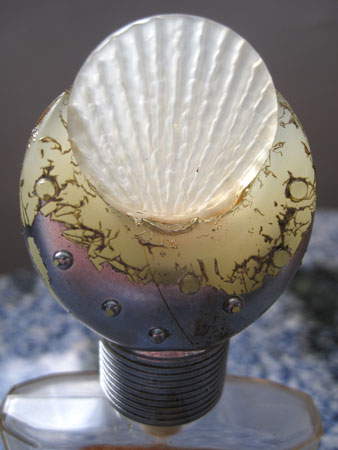 I guess that’s what Cher thought was happening to her face when she started shooting it full of whatever she shoots it full of to be left with a face that’s as immobile as a rock. It may look pretty but the only real emotion you could detect from her in Burlesque is when her eyes teared up. Twice. But I don’t want to be mean to Cher. I love Cher. It’s just that you can’t feel anything from something human that doesn’t move. And when you throw that into a movie that’s all surface/no heart or soul and shakes at the exact same frequency for two hours straight it makes you want to check your cell phone or do whatever else you can do trapped in your seat until the slop ends. My friend Diva always brings her knitting with her in case of just that.  Here’s how much she got done during Burlesque: 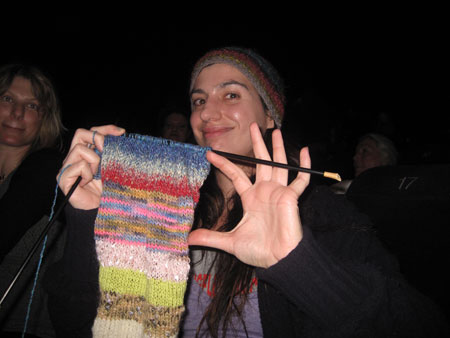 Even this bottle of Cher perfume has a little actual something in it: 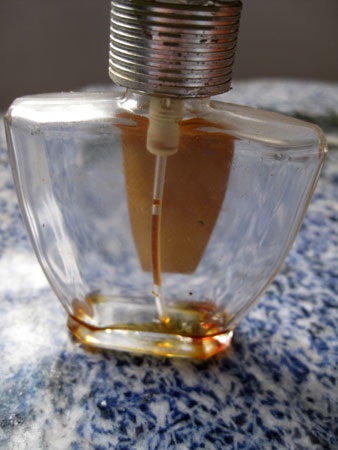 It may all be stuck in the spritzer thing but at least it’s there and you can still smell it. I was hoping Burlesque reeked with kitsch classicism, bursting with so much flavor of self-importance that I’d never be able to get the stench out of my nose. Instead it was nothing, just a big plastic inflatable turkey: 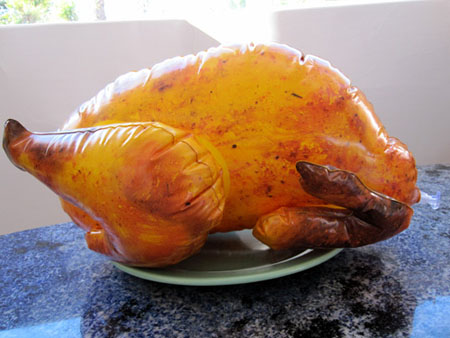 Big budget movies offend me to begin with. And one that throws so much in your face and you don’t even feel the splat really bums me out. What a nothing experience. And, by the way, how do you put Cher and Christina Aquilera in a movie together and not have a duet?! What a waste of Cher. 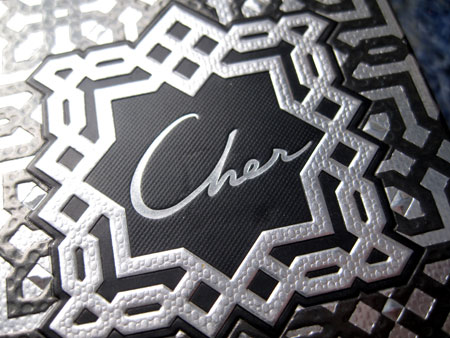 But I’m not here to give a movie review. I’m just here to show you a bottle of perfume. 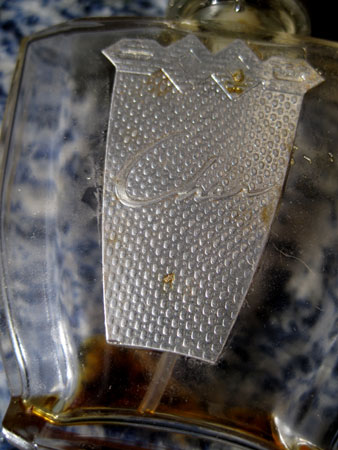 Now the only question is what do I do with all the Milk-Bones? 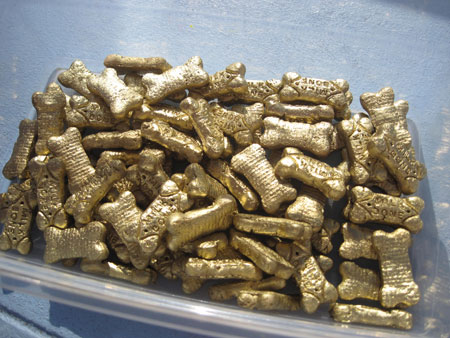