I’m so NOT the type to wear a ring with a G-clef on it or have one of those cheesy license plates like GR8T BEAT. My gold records don’t hang in the living room so they’re the first things you see when you walk in and my clothes aren’t Bedazzled with musical notes. But this ring is so stone cold handtooled 1960s my finger had to have it. I bought the ring about 10 years ago on eBay from someone in Memphis. I can feel a heavy barbecue-grease-guitar-picking vibe every time I slip it on. It also weighs a ton, quite a surprise as it looked like a cheap plastic gum ball machine prize ring in the photo online. So I end up wearing it a lot. Like I did Saturday night when I went out with my friend, Stan Zimmerman, though the hand I’m holding up in this photo unfortunately isn’t the one my fabulous music ring was on. 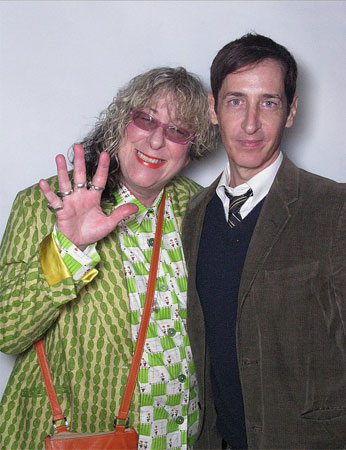 As unlikely as I am to have musical notes pasted all over my personal accouterments I’m just as unlikely to show up at a party where singers and songwriters take turns singing their own songs. I’m around music and singing all day; I don’t want to be around music and singing all night. Plus, despite my musical proclivities I don’t play an instrument so the possibility of me even being able to plunk the opening note of one of my songs at a party like this is nil. But there were the ring and I and Stan at a party that featured just that, thrown by voice coach to the stars, Eric Vetro, and songwriter/producer to the stars, Desmond Child. So many of my friends were there though that me, Stan and the ring had a great time despite not participating in the main event.

I go wayyyyyyy back with the first folks I saw, from (L-R) Rick Nowels, Maria Vidal, (me), Toni Basil, and Desmond Child. 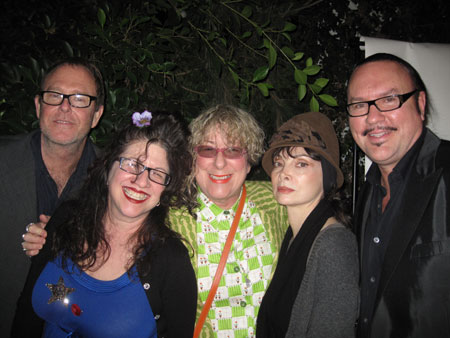 Soooooo far back that I was practically in diapers when we met. Desmond and Maria were in a group called Desmond Child & Rouge who, in the mid 1970’s, sang at Reno Sweeney, a cabaret in Manhattan where I was the person who walked around the city by day nailing up fliers of upcoming performances. I saw them sing every night because in addition to my $20 a day salary I got to eat at Reno’s for free. Maria married Rick in the late 80’s. Between me, Desmond and Rick we’ve sold somewhere around 500,000,000 records and have had just about as many great times together. What we all had in common was also Bette Midler, the biggest thing to come out of the New York cabaret scene and the biggest jewel in our show biz clique. Even back in the 70’s Toni Basil was Bette’s choreographer. She was also one of my first friends and collaborators when I moved to LA in 1976. Here were are in 1982 at a party I threw for her when “Mickey” went #1. 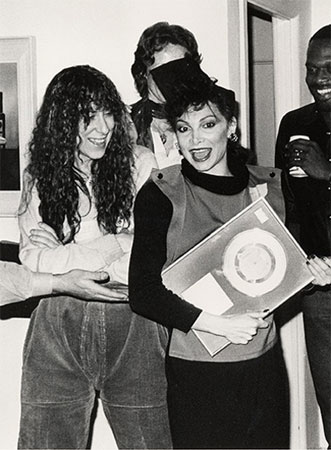 Here we are Saturday night with singer Sarah Hudson and X-Factor’s Storm Lee thrown in. 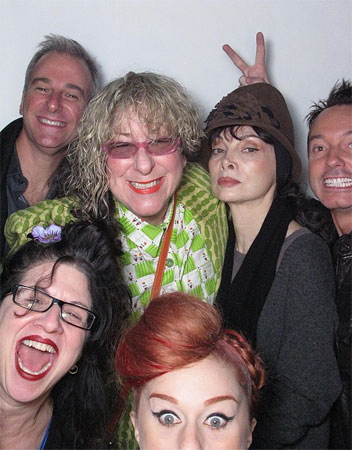 Maria and I also spent a lot of time in a corner chatting with Frances Fisher. 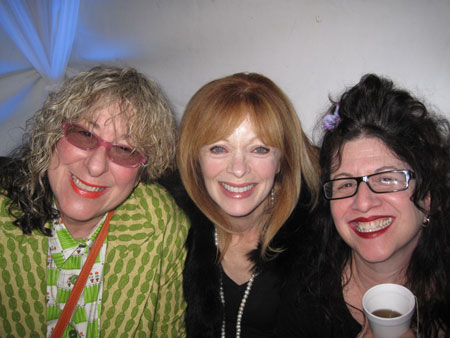 Another friend from my 1970’s NY days at the party Saturday night was Allan Rich, who sang at Catch A Rising Star, the big comedy club where I was the hatcheck girl at the time. Allan got his big break when he was a shoe salesman and gave Barry Manilow a tape of his songs when he sold him some shoes. 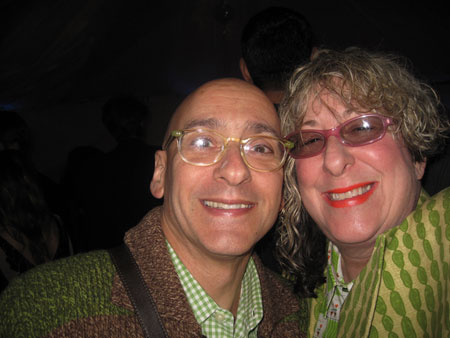 I spent a lot of time talking to Michael Orland, the Music Director at American Idol and with whom I’m about to start writing tomorrow. I’m completely sick of not being able to sing my own songs at parties like this so, just like an American Idol, I’m also going to rehearse a little medley of my hits with Michael so when Eric and Desmond throw this party again next year I can get up and sing instead of chatting through everyone’s songs because so many of my friends are there.  Like songwriter extraordinaire, Diane Warren. 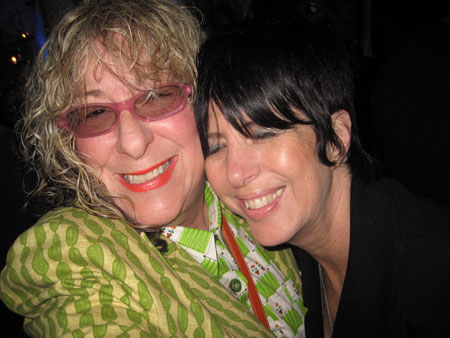 But despite how much musical talent was at the party there was clearly one star that shone brighter for me than any other and that was THE BEAVER!!! Jerry Mathers, The Beaver, who I watched incessantly as  a kid… 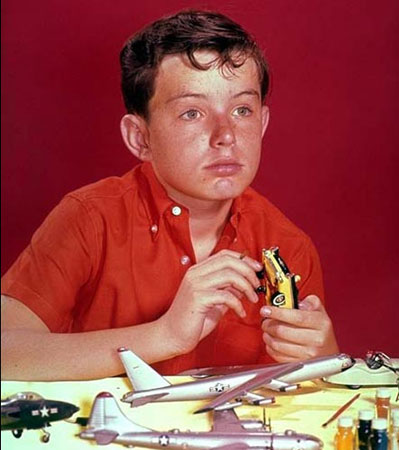 The same Beaver who’s going to come over in a few weeks and autograph all that memorabilia!! If I collected memorabilia from anything as recent as Desperate Housewives I would also invite Marc Cherry, seen here waiting for his car with me, Stan and The Beav. 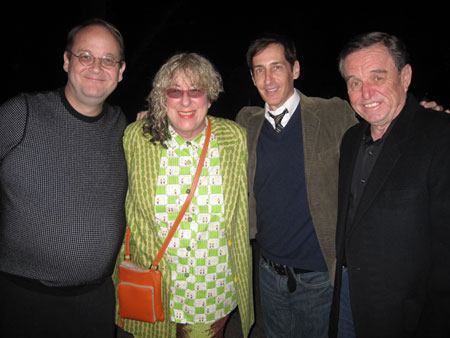 All in all, it was a great night for me, Stan and my funky l’il music ring! The concept of this “Foaming  Musical Hand Soap for Kids!” is really crazy. Theoretically kids can “wash & learn” at the same time. But the biggest thing they’re going to learn is that the quality of the speaker in this thing is so poor that the only one who could possibly hear the music clearly is an insect who somehow slipped through one of the speaker holes and got trapped in the goo, forced to listen to the nearly inaudible and annoying little gremlin voice singing something about washing around your face and continuously spelling S-O–A.–P. Honestly, you have to hover so close to the bottle to hear anything that all most kids are going to get is a big squirt of soap in their mouths. In this case, it’s berry scented so perhaps there’s some nutritional value to it. Not having kids perhaps this isn’t as novel of product as I think it is. What’s really novel these days though is having a hit in the music industry. I have a big fat hit right now, “Jungle Animal” by Pomplamoose and Allee Willis, but we made and released it independently so relatively few coins will accompany the constant viewing of the song on YouTube or listening to it on itunes or playing the game on my site. This is because I “washed my hands” of the music industry long ago. I was much happier making music on my own so total creative control stayed with me and whoever I wrote with. The practice of getting songs on the radio often felt too “dirty” for my tastes, not to mention I thought most people in the industry were deaf, dumb and blind to the Internet throughout much of the 90’s, during which time had they not been so arrogant and clueless they would’ve had a chance to help define the medium and figure out how to derive income from it as the public more and more obtained their music for free. No one should ever turn their back on technology. This was a big topic of discussion last night as I attended the ASCAP Love Fest, an annual party thrown to celebrate the ASCAP songwriters, of which I’m not one – I’m BMI – but have been lucky enough to be included in on the festivities every year as I write with so many ASCAP writers and love a lot of the people who work there.

I had an incredible time at the party because I go so far back with so many people there. The first person I bumped into was the first singer who ever heard a song of mine. In 1972, Bette Midler came to my apartment in Manhattan to hear the first two songs I ever wrote, “Childstar” and “Ain’t No Man Worth It”. She actually rehearsed both of them for her show but it wasn’t until years later with a song called “One More Round” that I finally got on one of her albums. I totally associate my first baby steps into show business with Bette. She was the first big global star that came out of my first show biz clique and that made it very exciting for all the rest of us as we struggled along to fame. 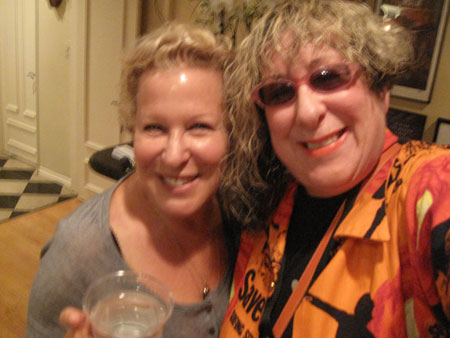 I know that photo’s a little blurry but I liked it better than this one: Here I am with Allan Rich, Jason Gould and Marsha Malamet. I go as far back with Allan and Marsha as I do Bette. By night I was the hat check girl at Catch a Rising Star which, along with the Improv, was the biggest comedy club in NY. By day, I slapped posters on telephone poles for the acts at Reno Sweeney, the most popular cabaret at the time. Allan sang at both clubs and Marsha played piano. When I moved to LA in 1976 I left my hat checking gig to Marsha. A few years later when Allan finally moved to LA he got his big break when he sold a pair of shoes to Barry Manilow, who we all knew from when he played for Bette, and slipped him a cassette with some of his songs on it.

Here I am with Holly Palmer, aka Cheesecake of Bubbles & Cheesecake, and Jon Lind, who I co-wrote “Boogie Wonderland” with. I’m very proud of my technique of being able to take a photo with three people in it without having to ask someone I don’t know to take the photo.  It works a little better with two people in it though as I can hold my arms a little lower: 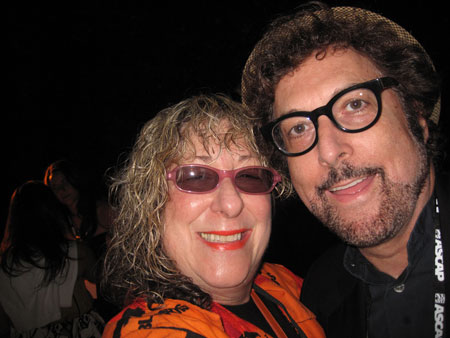 Stephen Bishop and I both had an excellent run of hits in the 80’s. Every time we went to a big songwriting event they seated us at the same table because we were always the sharpest dressers. Having seen so many old friends I’m really glad that before I left the house I smacked the top of my Soap Tunes – not because I got to hear the annoying, barely audible song again but to make sure I was clean and smelling nice.  The part about using the soap is true but the part about smelling nice isn’t. As many people as I hugged last night I was completely aware that I smelled like a car air freshener the whole time. Thank God they all knew me for decades and know that a) I can write a good song and b) I’m capable of not smelling like a fruit orchard.