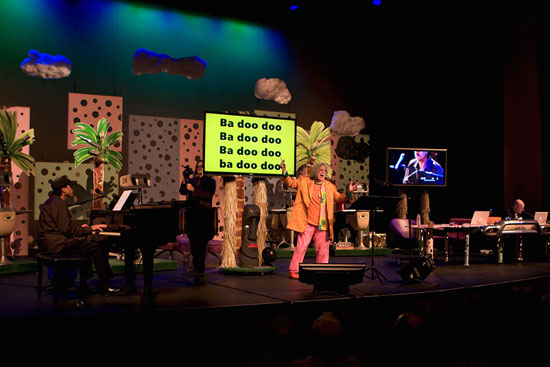 To say that my first performance in 37 years since jumping off the stage in the middle of my own show in 1974, Allee Willis’ Soup To Nuts Party Mix at the El Portal Theater in beautiful North Hollywood on October 18, was anything like what I expected is the Katrina of understatements. Anything that could go wrong did. But as I’m an artist who plans to the extreme so that when the inevitably unexpected happens it can be swiftly and humorously dealt with, it was a supreme triumph of soul, kourage and kitsch. At past parties of mine, the precursors to my performance now, these malfunctions have been limited to those you could count on one hand. Now, the 6,437,932 technical black holes that befell Soup To Nuts only made for more laughs and make me want to preform more! Not that the mayhem is so easily detectable in these photos, but the fun, style and funk that filled the evening and the days preceding it certainly are. For an overview, start here. For specifics, press one of these lovely buttons now. 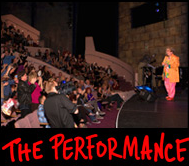 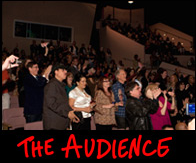 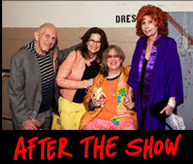 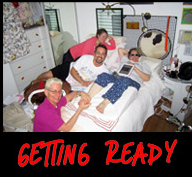 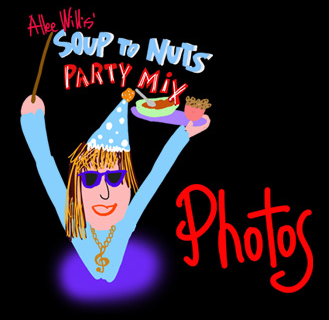 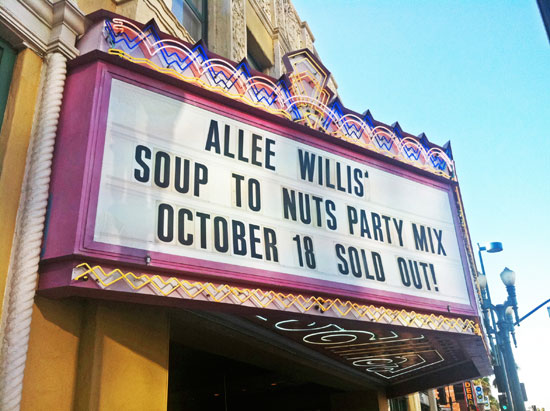 In 1974, Allee Willis walked off stage in the middle of her own show. Now she’s finally coming back! The Grammy, Emmy, Tony and Webby award-winning and nominated songwriter, artist, singer, technologist, collector, and party thrower comes to the El Portal Theater in beautiful North Hollywood for one night only of songs, stories, and party games. Sing-along to Willis’ greatest hits like “September”, “Boogie Wonderland”, “Neutron Dance”, “What Have I Done To Deserve This” and “I’ll Be There For You (theme from Friends)”! Win valuable prizes! Watch her as she attempts to get through the evening without walking off stage for another 37 years!

“..A rare look inside the process of one of the most prolific and tenacious interactive media artists working today.” – salon.com

“Willis is the spokeswoman for this grand dance of junque nouvelle and vérité… as if Ozzie Nelson had acquired a sick and sudden taste for Surrealist poets. Her own interest in kitsch typifies the dichotomy that makes her interesting…The silliness, un-self consciousness, sense of whimsy and innocence are reflected in the absurd designs and bright colors (that surround her). Even the themes lack pretension… Hopeful images of a powerful America and its future.” – LA Weekly

“…A singular vision by an artist, who if not limited by building codes, would be the Simon Rodia of the 21st century.” – Chris Nichols, Los Angeles Magazine