“Do you remember the 21st night of September?” I’m blessed to have co-written that immortal line (and all others) in the song recorded by Earth, Wind & Fire that not only defies the laws of musical gravity, floating higher and higher as the years roll by, but also seems to have created an unofficial holiday by making that date – September 21 – singingly immortal!

As such, Friday night, the actual “21st night of September”, 2018, I performed a special version of my one-woman-plus-Andrae “party performance” show, spotlighting one song and one song only – the kitschiest, most complete examination and celebration of the big ba-de-ya “September” ever!!

Featuring bad “September” videos, good “September” videos, the supreme Earth, Wind & Fire “September” video, “September” sing-alongs, improbable stories about how the song was written, and, of course, voluminous auctions of items from my own personal kitsch pop culture collection, ever-expanding in girth as a result of “September” initially popping some coins into my pocket. Plus an extra-special live performance by Butterscotch performing the version of the song that made me reach out and ask her to collaborate, something I’ve never done before despite seeing virtually thousands of renditions of “September”.

So BA-DE-YA and please enjoy these visual snippets of this most funny, fun, sentimental, reverential, blasphemous, and otherwise hitting-every-emotion-under-the-sun 21st night of September show. 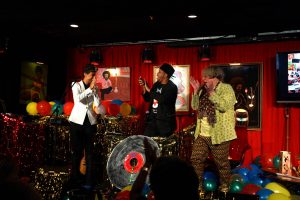 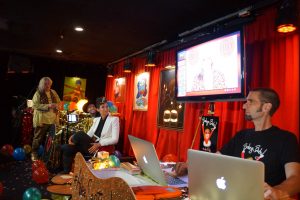