Had an INSANELY GREAT time at my alma mater, the University of Wisconsin in Madison, this weekend. I got to conduct the 300 piece marching band playing my songs in the stadium packed with 82,000 people, and got to do it 3 times! This jumbotron shot happened during “Boogie Wonderland“ at the pregame show. I also got to conduct “I’ll Be There For You” during halftime, and both songs during a pre-pregame Badger Bash outside the stadium. Haven’t gone through the literally thousands of shots people have been sending me so there will be much more posted later of this incredible alumni weekend. But this particular moment was such a thrill I wanted to get it right up. And I still haven’t even gone through shots and vids from my whirlwind week before in Detroit doing my live show and being in Motown 60, fulfilling every childhood music dream I ever had. So lots more to post as the days go by. Go Badgers (we won the game against Northwestern)! And Onnnn Wisconsin!! 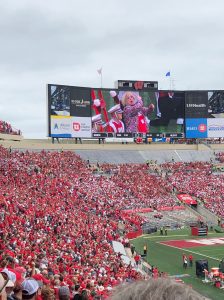