More from Tuesday night’s Season 3 premiere of Pamela Adlon’s FX show Better Things. First photo’s with Prudence Fenton and our great friends, Monica and Phil Rosenthal. Phil was the creator, writer, and executive producer of Everybody Loves Raymond and Monica played Amy, Robert Barone a.k.a. Brad Garrett’s on again-off again girlfriend on Raymond. Phil’s also been instrumental in Pamela’s TV career, including coaching her on making this season of Better Things. which is BRILLIANT. And if you haven’t caught Phil’s PBS show I’ll have what Phil’s having, it’s one of the warmest, funniest and most charming food-themed shows ever. Second photo is me and Diva Zappa holding our name cards for photographers as we are about to alight the red carpet. 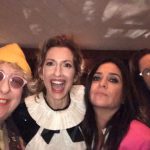 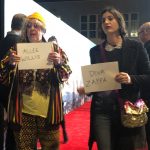