R.I.P. Bob Esty. Not only did Bob produce and arrange one of Disco’s greatest records ever, like greatest, Donna Summer‘s “Last Dance,” as well as a ton of other Donna and a lot of Barbra Streisand, not to mention Cher, who he wrote and produced “Take Me Home“ for and so much more, but he was my very first musical director when I went on tour in 1974 to promote my one and only LP, Childstar, containing the first 10 songs that I ever wrote. This photo was taken at our second rehearsal, 1974, which was literally only the second rehearsal I’d had in my entire life as I was terrified of performing. Bob never lost faith in me. He was even on stage when I jumped off the stage in the middle of the instrumental of the sixth song at my fourth performance ever when I literally kept walking till I was out the door to just concentrate on being a songwriter. It took me til 2011, 37 years later, to perform again and Bob was at that show when I did. All my early memories of my very first steps into music and songwriting contain Bob. He had an infectious laugh, was always smiling, always incredibly supportive, and a lot of fun to be around. A genuinely great guy. I will miss him a lot. R.I.P. Bob Esty….. 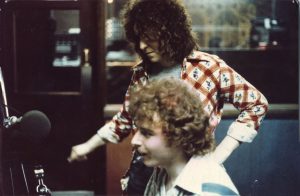