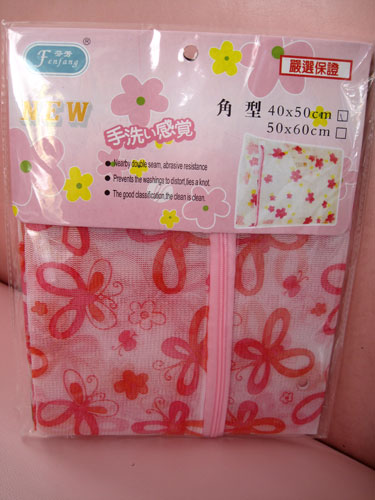 Judging from the photo on the package I suppose this is some sort of little storage bag or purse or something but the only thing that I can tell from the labeling is that it’s “New” and its name is perilously close to the weight loss drug in the mid 90s that took a whole lotta people out. 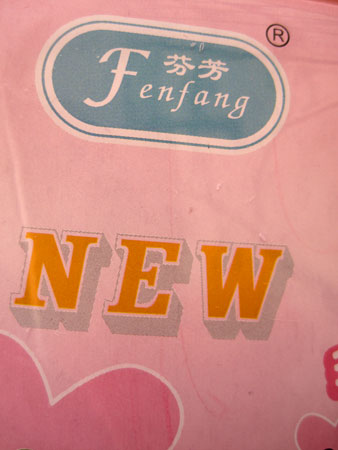 Unless you can make sense of it also being “Nearby double seam, abrasive resistance” and that it “Prevents the washings to distort, tie the knot.” But it’s actually the last important point about the product that’s my favorite: “The good classification, the clean is clean”. 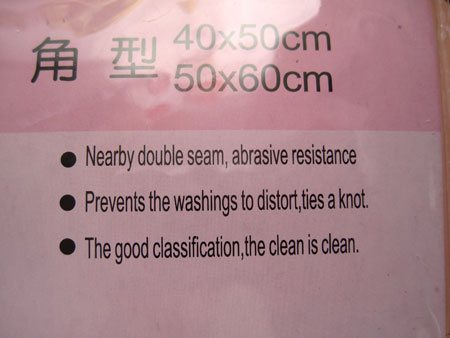 This mangled translation, of course, makes me love this product no matter what its use. Serious kitsch value is in leaving the package undisturbed and never knowing the true nature of the contents. And you won’t get help from the back of the package either: 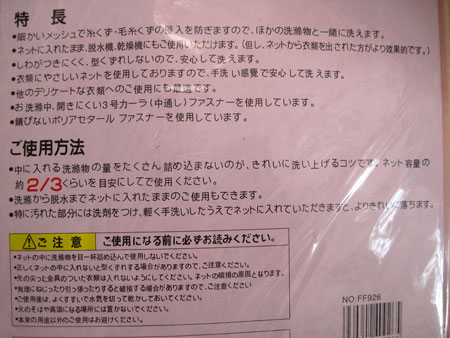 This is what I LOVE about 99¢ and dollar stores. You would think for overstock product shipped from overseas that they would at least slap a label on that told you clearly what was inside. Though for a buck I guess they’re counting on the fact that if you can even guess what it is it’s such a bargain you’re gonna go home with it anyway. For me, it was enough to see psychedelically influenced flowers printed on shades of pink mesh that did it: Because  it has a zipper I might put my money down on makeup pouch. Or perhaps a small storage bag. I did a search for the company name, Fenfang, but all I found was a Chinese restaurant in Cochin, wherever that is, and a Fen Fang, a praying mantis that’s eating a cricket, on YouTube. Neither one of these give me any clue as to what the mysterious mesh flower artifact is. Hmmm, maybe you stick something like nylons, which I haven’t worn in decades, in so they don’t tangle while drying quickly? 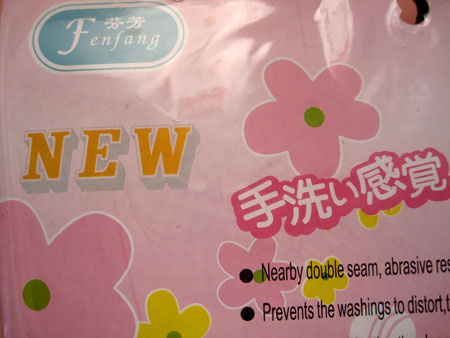 Ultimately, none of this matters as I’m way more attached to packaging that makes no sense than I am to having one more little case that can get lost in the bottom of my drawer only to have me discover it years later and re-gift it. 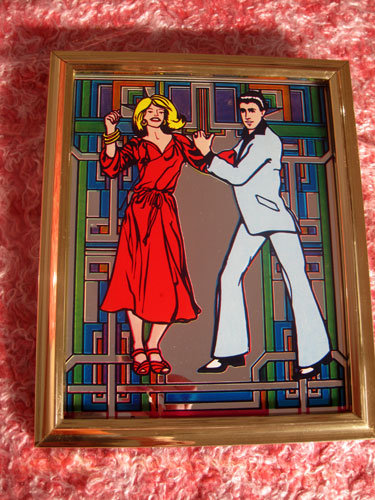 Of my entire immense collection of Disco artifacts this almost-John-Travolta-with-almost-Toni-Tennille disco mirror is way, way, way up there on my favorites list. 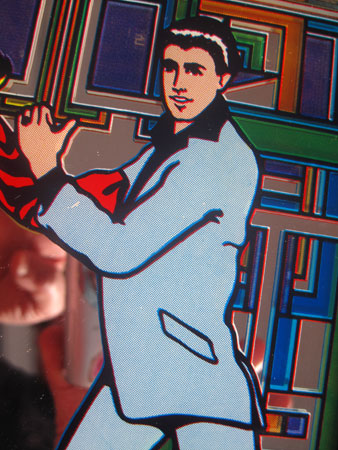 Almost-Travolta and his partner are exactly the kind of people who wouldn’t have made it into Studio 54. Quite the contrary, her little-too-late  swish of Farrah Fawcett hair, drapey polyester dress and bangle bracelets make for the kind of outfit that filled up discotheques on the outskirts of towns at the sides of freeways all over the United States. There’s so much more going on on this mirror than disco dancing it’s totally nauseating to look into it for very long. But I would never complain too loud about a product that hangs on a wall that’s actually called “Disco Dancing”. The footwear especially kills me: Which is good because after staring into the mirror for too long it’s all I can do to stare down at the floor and see my own feet in order to bring my head back to a normal state. Then again, it’s a very cheap and medically safe high to look at almost-John, almost-Farrah/Toni T. and their disco floor-inspired mirror background to feel like I’m hallucinating.