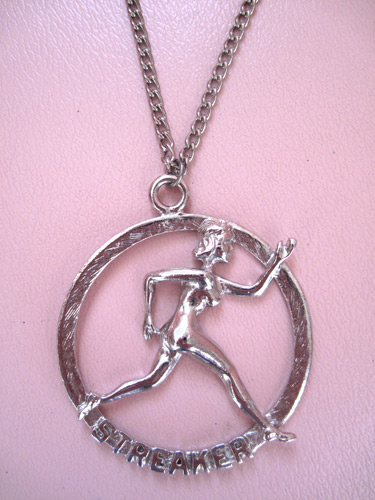 Cheap jewelry is always a popular breeding ground for Kitsch. Kitsch glitz  shines especially bright when designs are made to capitalize on popular trends such as the streaking craze that began in the 1960’s and attained astronomical heights when a peace signing streaker crashed the 1974 Academy Awards blazing behind actor David Niven. From that point on, streaking was  as glorified in all forms of design, from T-shirts to decals to plaster figurines to the kind of tacky finery you see here.

If the people who practiced the sport had incredible bodies it would make for fine spectator fare but usually it’s just some attention starved paunchy dude with a severe “shortcoming”.

Also, most streakers were/are male so curious they chose a female to be immortalized here. So very 1970’s Woman’s Lib.