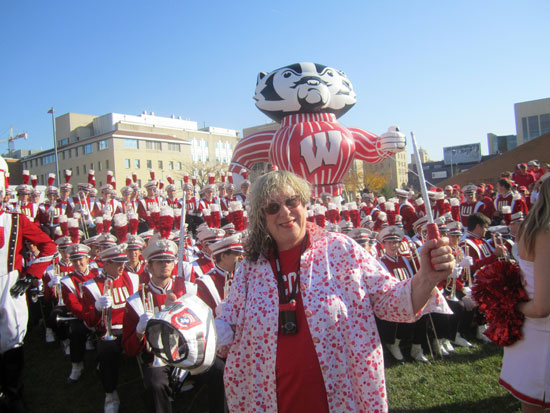 I just got back from spending three of the most fantastic days of my life. Seriously. As I’ve been blabbing about for weeks now, I had the great honor of conducting the 300+ musicians in the Marching Band at my alma mater, the University of Wisconsin, as they played my songs at the Homecoming football game which, btw, we won! 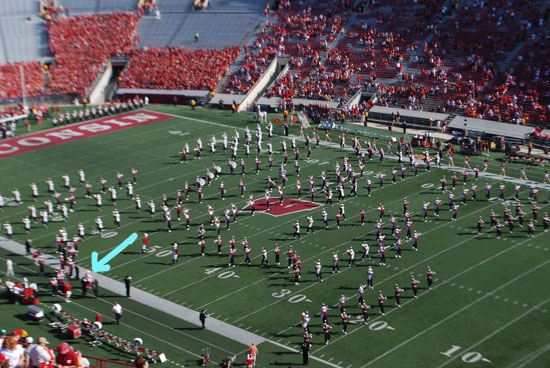 I was completely thrilled to be asked and took it very seriously, if for no other reason that I don’t read music and therefore knew I’d have absolutely no idea how to follow–let alone lead–the band as they played. I rehearsed every night by conducting the actual records as they were originally cut, a bunch of Earth, Wind & Fire and the theme to Friends, and then watched literally hundreds of marching bands playing the songs on YouTube, most versions of which were completely different from each other not to mention the original records. Ultimately I decided I would just have to feel the groove and move my custom-made-by-me Wisconsin red and white glitter drumsticks with bicycle handlebar grips spontaneously and instantaneously catch up with any tempo change or unexpected accents that may occur.  Beyond anything, I knew I had to stay cool because I was doing it in front of 82,000 people and my choices were either to be nervous and uptight or hang loose and savor every incredible second knowing that this is something that doesn’t happen to everyone and would be a moment I would remember forever. 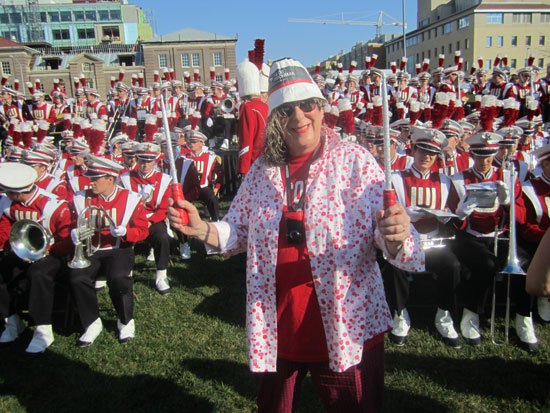 One of my biggest dilemmas was trying to figure out how to blog about this incredible adventure in a concise and meaningful way. I take my blog very seriously. I may write about crazy objects that I’ve collected forever but ultimately my feelings about the objects are all a key to myself. 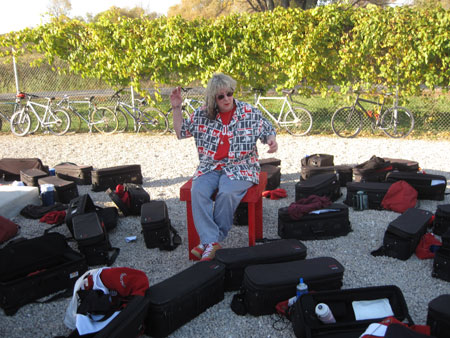 I’ve long been aware that as an artist my primary canvas is myself. My songs, if I have any control of the lyrical content, are completely autobiographical. My art has always explored some kind of situation I was in whether I was conscious of it or not. And as soon as I jumped into digital technology in 1991 I knew instinctively it was all about social connection and that I, as a consummate party host, would learn more about myself through the people I connected with than I ever would on my own. So, I don’t want to just throw bunch of pictures and videos up here that documented my experience so much as use those things to talk about the impact they had on me as a conscious human being and artist. 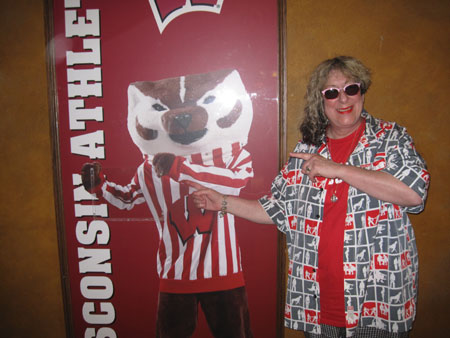 All weekend I was blessed to have great friends around me who took care of everything so all I had to think about was keeping the glitter on my drumsticks and be mindful of tempo. Anyone who knows me knows I take making friends very seriously because I realize the impact they have on me. Hell, I even wrote the theme song. Here I am with Jon Sorenson, from the UW Foundation, who came up with the idea of me conducting the band in the first place… 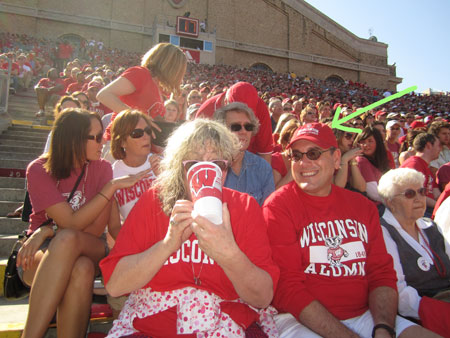 … and Mark Blackwell, who I work with in LA and who flew in with me to video everything… …. and Mike Leckrone, the beyond legendary bandleader/arranger who’s been at UW since I went there in the 60’s. 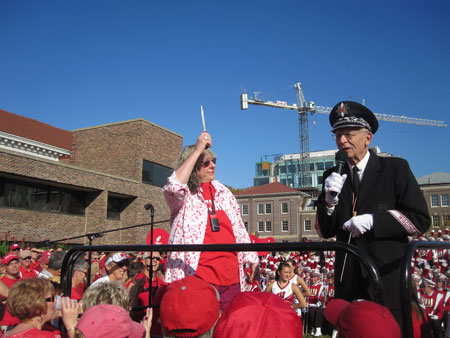 Even some of my sorority sisters showed up to support me. There were more of my SDT sisters there but we never were all in the same place at the same time for a group photo. 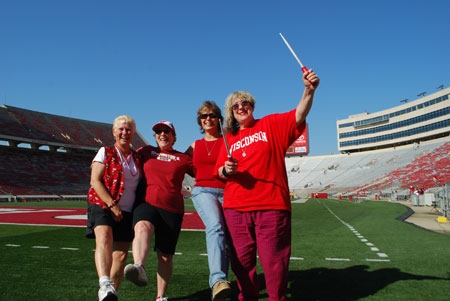 Standing right next to me is Muffin Alschuler. Mark and I stayed at her house and she and her husband, Eddie, were absolutely the best babysitters/ tour guides/handlers one could ever hope for. But in all of the 600 or so photos I got from everyone’s cameras there wasn’t a single photo of me, Muffin and Eddie together. Which is real shame as they’re two of the nicest people in the world and I never would have had this degree of the world’s most incredible weekend had I not stayed with them. But a threesome photo isn’t the only thing that was missing concerning documentation and the Alschulers…  All weekend long Eddie had a little Sony digital camera that he was taking incredible photos and movies on. But I asked him to shoot my conducting debut on one of the big HD video cameras I brought with me because he and Muffin were going to be sitting across the 50 yard line from where I’d be conducting and would have a spectacular overview of the band with me facing them. I decided to do this at the last moment right before I marched through the tunnel with the band and out onto the field. Unfortunately, I didn’t tell Eddie that the camera is in record when the light is red, not green. So I ended up with lots of footage of Muffin’s crotch as the camera lay on her lap patiently waiting to go into record, red light blazing, only to snap off as soon as you hear my name being announced and my music starting. Here’s what was captured of my performance: I know, I’ve never looked better. Alas, I believe in synchronicity and so consider the fact that Muffin, Eddie and I never actually got it together to take a photo with just the three of us a matching set to the non-video they graciously took at the game. Throughout it all I remained cool because Mark was right there with me on the field shooting away so I knew I had reliable backup. Ha ha. Despite my proclivity for a massive overabundance of documentation as well as the fact that I had the time of my life and now want to be a conductor, the video gods were not looking down on me as Mark’s footage was filled with blips, as if someone put their finger on the tape head every few minutes to make it gag. That’s it for me and Sony Mini DVs. I’m sick of all the aliasing too, as if the edges of everything had been cut by one of those scissors with the diamond shaped teeth that people go slaphappy with in their crafts projects. Check out the drumsticks. They’re not striped in real life. Neither am I. 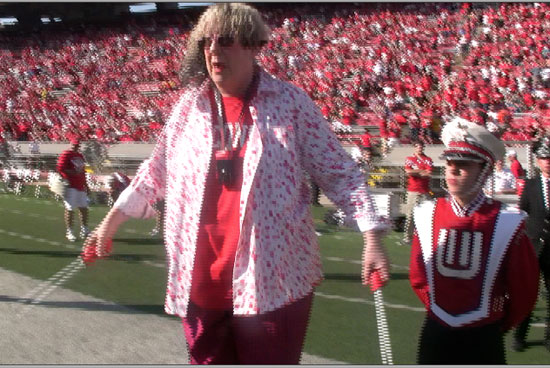 Anyway, I would like to think that I was more reliable than Sony tapes when I taught a couple of classes while I was in Madison. Here I am with The Wisconsin Singers, students who are passionate about singing and performing and most of whom aren’t majoring in either, something I can totally relate to. 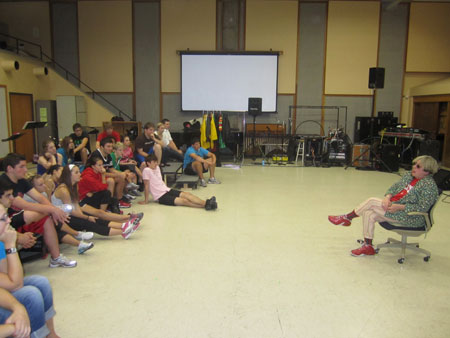 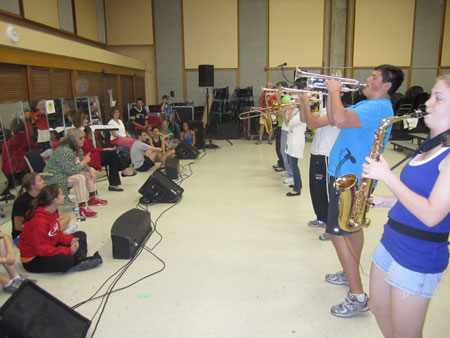 I also spoke to students at the Hamel Family Digital Media Lab. They were probably expecting a big visual presentation and lots of tips about how to get into the business but I was there to talk about my belief that anyone can do anything they want to do if they just have the vision and balls to do it. I’m definitely not the one to talk about how to get into the business as I’ve functioned outside of it is a self-funded artist for at least half of my career. If I had to live up to the standards of the entertainment and art businesses I may have had more hits but I’d be a shell of a person for having to club my brain to death so I could stay within the lines. So I just talked about being yourself and and making the absolute best of that. The only school I ever went to to learn about music was the radio. I like it when people study one thing and do another. I like it when I don’t know how to read music yet can conduct an incredible marching band. At its best, life is about learning to do what you love by whatever means necessary. The last place I ever thought I’d be is in the middle of a gigantic stadium conducting music that I have no idea how I ever really got it together to write in the first place. But there I was anyway. And that’s something that no faulty video tape or green and not red light can ever erase.