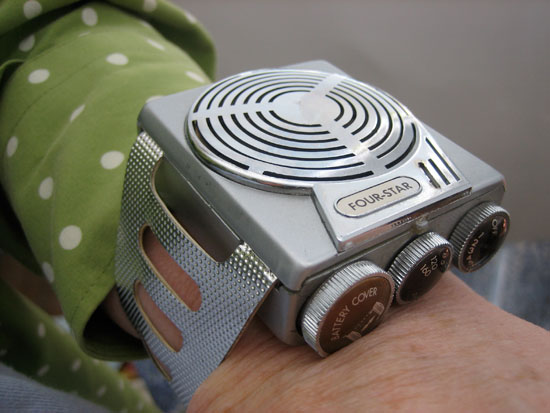 …come see me and my latest piece of technology, this 1960’s wrist transisitor radio, on the “Indie Success: Caching in on Collaboration” panel, Tuesday March 15, 11:00AM at the Hilton, Salon C, 500 East 4th Street. Here’s what me and my wrist accessory will be talking about:

“Since the web began we’ve been talking about artists having a career without a label and going directly to fans. We finally have examples of this working, so what does it look like? 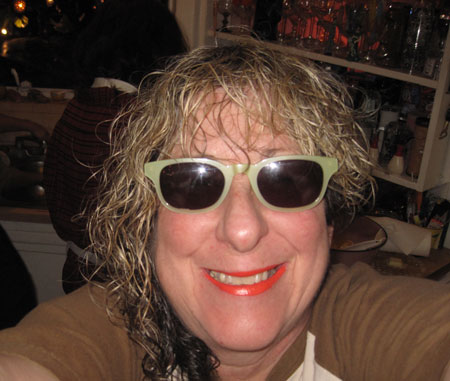 SXSW Veteran Heather Gold sits down with successful collaborating indie artists including: Allee Willis (September, Boogie Wonderland, The Color Purple, Theme from Friends, over 50 million albums sold), Mary Jo Pehl (Mystery Science Theatre 3000, RIfftrax, NPR) and Kenyatta Cheese (Know Your Meme, Rocketboom). The Net links almost every form of artistic making, so it makes sense that we’re in an era of increasing collaboration and creation in many forms. We’ll find out how limitations and openness serve them in an era of “personal brands” We’ll find out how they deal with rights, friendship and creating the best space in which to collaborate. We’ll also dig into their collaborative process in making social experiences, music, video and comedy and find out how they’ve succeeded creatively and in every other way.”

Arriving in Austin tomorrow night.  See you there on Tuesday. My biggest message: As much as it’s about technology, it’s about a charming personality… 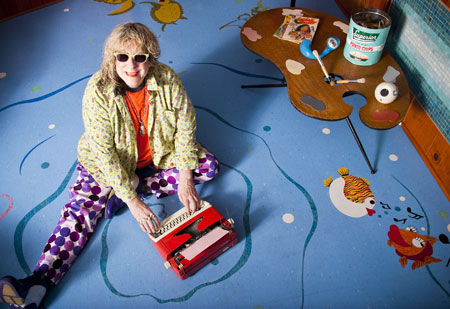 (Photo with my Royal typewriter, bought with my allowance money when I was 13, by Jennie Warren)

My relationship with technology has been one of the most intense and complex relationships of my life.  Here I am with my main squeeze in 1991, the first Powerbook ever released, a 170. 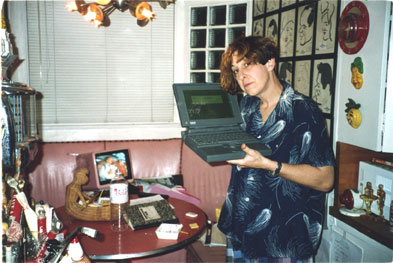 I was always a multi media artist, combining my music with my art and interactive parties long before ’91 when I first I attempted to combine these artforms in a digital realm.  My dream was to redefine music, art and socializing in the as yet unembraced Pop medium, the Internet, where the audience was as much creator/ collaborator as the artist herself.

My premise, which I shouted from every keynote podium from 1991-1997, was that art and information were no longer under strict control of the person who originated them but, rather, the co-product of the people who interacted with the art and information. In the Digital Age, the artist would shift from sole owner/creator to cruise director, merely providing the first piece and directing from there a never ending sprawl of mutations from users who were interested enough to impact the original work.

This premise was blasphemous to captains, worker bees and artisans alike in the all ruling Entertainment Industry.  I viewed them as horse farmers, belligerently staring as prototypes of the Model-T cranked down dusty roads at the dawn of the 20th Century, arrogantly holding on to the belief that nothing could supplant the sale of their well bred horses. But the horse farmers didn’t understand that the promise of automobiles was the reforming of communities and a collapsing of time and space. Just like the Entertainment Industry almost 100 years later didn’t understand that the promise of the Internet, mobile devises and any connection that linked virtual and physical space meant the very same thing – a redefining of community, living space and beyond anything,  the empowerment of common man.

In 1992, after I proclaimed my total disinterest in all artforms linear, I started developing an idea for willisville, the world’s first visual and collaborative social network.  It would also link the Internet to TV, radio, film, video, books and physical spaces. You can bone up on it in detail here. 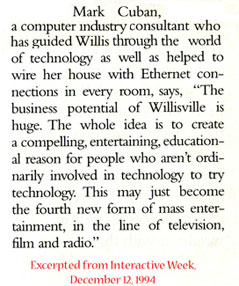 Attempting to sell this vision in 1992 and throughout the 90’s was like living in the basement of Hell. No one in Hollywood could fathom funding it as the Internet was to them a very creepy, laughable space. Folks in Silicon Valley could think of funding it but only if enabled by technologies they had already invested in. The one we were saddled with at Intel, who funded a willisville prototype in 1995, had about as much potential of encouraging socialization and artfulness among users as inviting someone to a party on the promise that you were going to rip their toenails out without anesthetic. 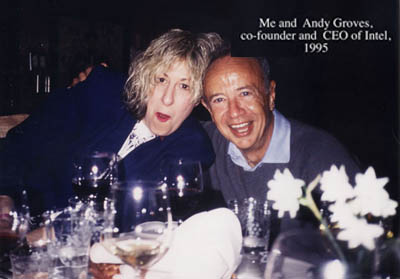 So, in 1997, after spending every penny I had ever earned on trying to sell my vision of the Internet as a social environment I crept back into writing songs and painting and even writing a Broadway musical. I still built websites, rather distinctive ones at that, but I shoved my quest to build the Brave New World and staying at the forefront of social technology down so low into my solar plexis it felt like I was made of cement.

This went on for almost 10 years. But painful as my self-imposed exile was, I was aware that my brain had been profoundly reshaped from the previous seven years of attempting to make order out of all the disparate forces coming together to define The Digital Age. And this impacted the linear work I started doing again. I was always an artist who looked to integrate my music with my art but now I was capable of thinking on a zillion levels at once, connecting everything so that one singular vision resulted from trillions of different threads.

The linear arts – music, art, videos, musicals, whatever – seemed simple and straight ahead after all the years of thinking about art as a never-ending series of connections and collaborations that linked to a lifestyle rooted in self-evolution whose very engine was kept running by the connections and creations made in cyberspace. I welcomed a break from the tedium of tapdancing for money, always hoping someone would be smart enough to invest in a non linear vision of social art. I once again loved linear songwriting and painting for the pure joy of creating. I hadn’t felt that way since I had my first hits in 1979 and felt the pressure of a follow-up and the boredom of working in just one medium.

But with this simplicity a new kind of artistic self torture identified itself. Things like Ebay, Amazon, YouTube, MySpace and Facebook had popped up. Wait! Wasn’t I the one who had thought of garage sales, homemade art, parties and collaborations in cyberspace? Wasn’t I the one who had preached Power To The People a full decade before the proliferation of social networking sites? I, who was sooooooooo ahead of the curve on all things digital, was now the last one to the party.

It finally hit me when The Color Purple opened on Broadway at the tail end of ’05 and I had a little breathing room to figure out what I wanted to do next. 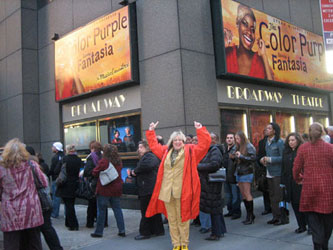 If I started singing my own songs I could do the videos and build web worlds and begin to have the kind of presence in cyberspace I had envisioned for everyone so many years before.

My first smash-up, “It’s A Woman Thang”, co-starring my alter-ego, Bubbles the artist, exploded on YouTube in 2007 and won a Webbie Award Honorable Mention in the Viral category.  (I recently uploaded a wayyyy better resolution version of it so watch this one if you haven’t seen it already.) I’m on my fourth one now, “Hey Jerrie”, featuring me and a 91 year old female drummer on an oxygen tank. I view these videos as  welcome mats into my world. But if that world is to be the one I envisioned oh so long ago it meant I needed to understand technology, integration and trends as deeply as I did in the 90’s.

I write, sing, play on and produce the records and write, paint, film, animate, direct and produce the videos and web components. I do some of the functions with partners and some without. To support the output I slowly and resentfully built my MySpace and Facebook pages. I made myself build pages wherever anyone told me to – Bebo, Uber, et al – and hated each one more than the last. I understood that these things were necessary but MySpace felt like one big hype assault from fledgling bands and hooker wannabes. Most of the other ones felt like pale imitators.

My breakthrough came when I finally started adding friends on Facebook after having a page that had all the life of a stillborn baby for almost a year. I looked for people who liked soul music, animation, kitsch, Atomic design and all the other stuff that I was not only interested in but had turned out like a mofo for decades. Some people never responded. But the ones who did were enthusiastic. And I communicated with them when they communicated with me. I understood that this social network had found an incredible abbreviated way for people to realize the potential in each other and form new alliances that physical space never encouraged them to do.

But Facebook cuts you off after 5000 friends.  Which means you have to uninvite people when you hit that mark.  Bad Facebook. Seriously stinky rule. I’m a party thrower.  I have friends. Talk about a major shortcoming if you’re lucky enough to be popular.

Other than the fact that I, like most folks I know, are  run ragged by attending to all the little gardens they have scattered all over cyberspace because they all lack something major that would allow for one centralized online presence, I realize I am finnnnnnaly building my own social network, finding what I enjoy about all the ones that already exist and building little presences wherever I can stand the interface.  It’s not the elegant cul-de-sac I once dreamed of with willisville but there’s a little piece here and a little piece there and with enough overtime and bus fare it’s manageable.

I’m in the midst of said proliferation now. I’ve been consciously thinking about cyberspace for 18 years. I have no idea what tomorrow holds. I rarely have. I just know that I hate to be bored. I hate creating what I’ve already created. Reinvention is my middle name. I still don’t know what I want to be when I grow up. But my brain enjoys getting watered and I can finally see green pushing up through the ground. If you’ve read this far perhaps you’re ready to hop on the bus and take the ride with me.