I am just usually climbing into bed at the insane hour that we had to wake up in order to get to a 6 AM rehearsal on a very dark, snowy and freezing Woodward Avenue with 150 Michigan Pom-Pom Girls who were performing “The D” in the Detroit Thanksgiving Day Parade. After the very quick yet bone chilling rehearsal I had a hot chocolate with Ruben Studdard who was singing a Christmas song right before the Poms and me did our thing.

Aside from the fact that the music sounded like it had been DJ’ed by a 103 year old to whom anything louder than a whisper was excruciating – I literally was conducting “The D” to an inaudible track with nothing but a very distant kick drum to guide me and the 300 swinging Pom arms but somehow they flexed in time.

As soon as that performance was done they hoisted me onto a golf cart and off we went to catch up with the NBC/WDIV Wizard of Oz float that I was to ride on. This might sound like it would be a pleasant respite from the more frenzied activity of the earlier AM but, in fact, going 30 miles an hour in freezing falling snow in a golf cart with no windshield to protect a person from LA with zero knowledge of tricks to keep warm, my fingertips were practically disengaged from my hands before we even reached the float.

Then there was the three and a half miles down Woodward on a moving vehicle with no heater or windshield and nothing but a little 4 ft. square fleece blanket they hand you before you get on the float to keep the frostbite away. Do I use it to keep the cold plastic seat warm or do I attempt to wrap it around my refrigerated carcass? It really wasn’t wide enough for either and most of the time it fell to the ground and looked like flocking at the base of a Christmas tree draped as it was around my numb ankles.

And then there was my Go Pro camera which I had mounted on a magic wand to film my insane teeth chattering and brain frozen bitching. As the only person in the world who has never seen the Wizard of Oz I have answered the question of why that is a zillion times. It is simply because even as a small child that “Ding Dong the Witch Is Dead” song drove me NUTS. Far too repetitive and annoying for me, even at 3. But not until I set a frozen foot on the float did it dawn on me that that song would be hammered into my brain back to back at least 600 times during the two hour so-cold-I’m-shocked-I-still-have-lips-on-my-face ride down Woodward. Most of the time I looked like a blanket-covered shell shocked Dali Lama, but I sprang into full conductor mode when we hit the TV Zone. All in all, I LOVED LOVED LOVED being in the parade. But from here on in my ride availability is only from May – September. 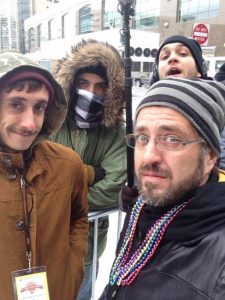 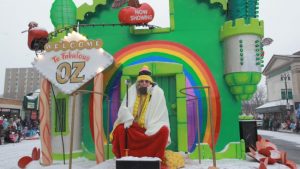 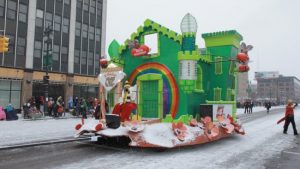 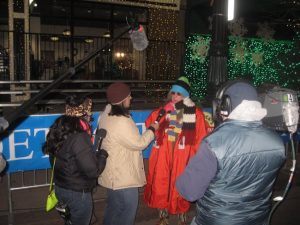 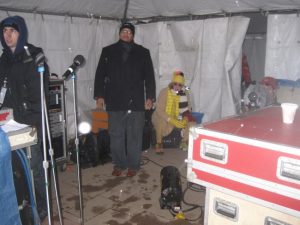 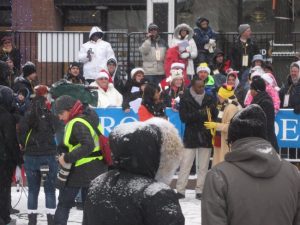 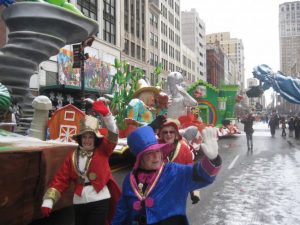 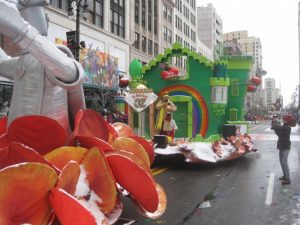 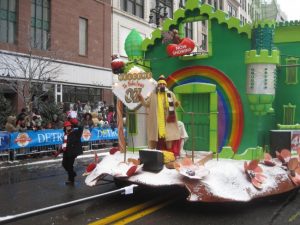 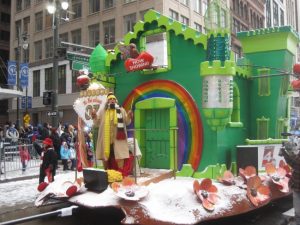