I know this is a completely horrible photo because both BONNIE RAITT and I – most notably Bonnie – are missing the tops of our heads because of that damn uber-blasting spotlight this was shot under. But I had to post it because I would be nowhere without Bonnie Raitt, the very first artist EVER to cut a song of mine, “Got You on My Mind,” co-written with David Lasley, in 1974. This was shot last Thursday night at the Songwriters Hall of Famewhere Bonnie was inducting John Prine. She sang his “Angel From Montgomery,” which was on the same album as my song and was one of the earliest background vocal sessions I ever attended. I hope Bonnie doesn’t see this photo because she will kill me for posting it with the middle of her head missing but I had to do it because I was so excited to see her. Easily one of the most consistently kind, brilliant and generous artists in the music industry ever!
#firstsongofmineeverrecorded #shof #songwritershalloffame #songwriter 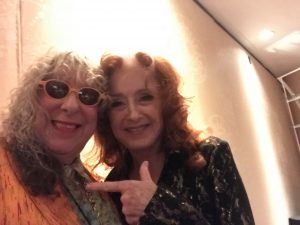