As many of you know and participated in, in SEPTEMBER and November 2013 I came back to my home and favorite town, Detroit, to record “The D”, the official unofficial theme song to accompany the reinvention of the city, as well as to shoot the feature-length documentary Allee Willis loves Detroit, about human spirit as seen through the people of Detroit as well as how my life and career parallel their trials and triumphs. NOW, on Monday, October 26 at 1 PM at the DIA you have one more chance to join in one of the most unique collaborations between an artist and a city that has ever taken place!

The 2013 sing-alongs were recorded at 50 locations all over the city when more people in history than have ever been the original artist on a record before – over 6000 Detroiters – came together in one expression of pride, joy and funkiness to let the world know that the Soul has never left the Motor City! They were joined by a plethora of world renowned Detroit born or raised celebrities, as well for the film over 20 Oscar, Grammy, Emmy, Tony, and Pulitzer Prize winning and nominated non-Detroit celebs, all of whom or whose work represents triumphing over struggle despite impossible odds.

Now is your chance to not only join us but to have one of the wildest afternoons of your life at the biggest (and last) sing-along of them all at the DIA in front of the Diego Rivera Detroit Industry Murals on Monday, October 26 at 1 PM! We will teach you the song there and you will be out by 3 PM at the latest.

The message of “The D”/Allee Willis Loves Detroit is the motto I live by – “From the ashes come the miracles” and that against the greatest of obstacles the greatest of things can happen if you only have the imagination, creativity, and guts to try. All of which is happening in Detroit now!

As opposed to other songs and documentaries done on Detroit, this one features no broken windows! And 100% of all profits from the release of the record, video, film, and potential docu-series come back to Detroit, specifically The Heidelberg Project and The Mosaic Youth Theatre of Detroit.

So I hope to see all of you as well as your friends, families, co-workers, anyone and everyone at Detroit’s crown arts jewel, the DIA, on Monday, October 26th at 1 PM. It’s also my big send-off before I go to New York where my musical, The Color Purple, the ultimate story of survival, opens on Broadway again starring the great Jennifer Hudson. So please forward this to all you know and LEMME SEE YOU THERE! 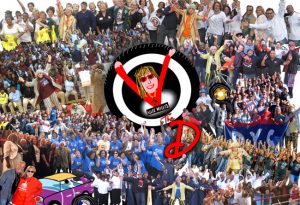