I’ve been incredible friends with the brilliant Beatie Wolfe ever since the first time we spoke about a year and a half ago. It was a 3+ hour-long phone call, a way deep dive into music, interactivity, and technology. Among Beatie’s achievements is creating the world’s first 3D interactive album app, a musical jacket – I mean a real jacket!, the world’s first live 360 AR stream album, she met the Queen when she represented the best of British innovation, and she has an album in outer space! The kind of combo unique musical brain/fabulous person I LOVE. We get together frequently, we talk for hourrrrrrs, and we eat a lot, though Beatie’s way on the other end of my junk food proclivities. Anyway, one of our chats included a profound conversation about Los Angeles, land that I love, to be the kickoff piece in Beatie’s new monthly column on LA personalities for the London Evening Standard. 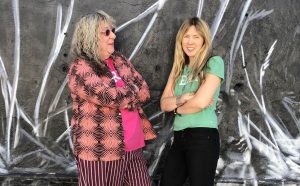